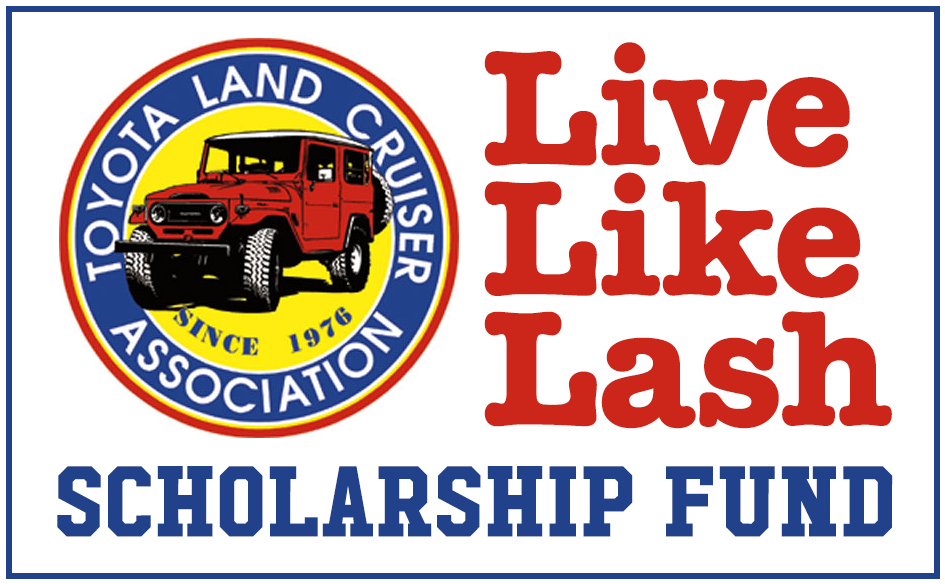 The Toyota Land Cruiser Association (TLCA), the international club of Toyota 4×4 vehicle enthusiasts, has established a unique scholarship for young people in honor of longtime member Lash Lacoste, who passed away in April 2022 after long battle with Multiple Myeloma. Mr. Lacoste was a well-known part of the TLCA community and also served on the board of local TLCA chapter CottonLand Cruisers in Mississippi. The scholarship was the idea of an anonymous CottonLand Cruiser member who has contributed significantly to the establishment of the fund.

The new scholarship is unique in that it’s been designed for students who exhibit the human qualities which Mr. Lacoste was known for during his life rather than being primarily based on school grades or test scores. “Lash was a B student in college, but he made lifelong friends wherever he went. Scholarships aren’t usually made available to students like Lash, but we think it will be great to honor his memory by giving it to someone who exhibits the qualities he was so well known for,” said Amanda Lacoste, his wife. “Lash was always smiling, always positive. People have said if you met him, you instantly knew him, and he was instantly a friend.”

When Mr. Lacoste passed in April, the outpouring of love for him was overwhelming. The hastag #LiveLikeLash began trending on Facebook, and the scholarship was named after this: the Live Like Lash scholarship fund. Donations have already reached $40 thousand and continue to grow through the donations of TLCA members and chapters.

The qualities that Mr. Lacoste exhibited throughout his life and on which the scholarship will be based are:

With those qualities in mind, TLCA will award at least one scholarship annually to benefit young people who are associated with the organization through a family member. Children and grandchildren of TLCA members can apply if they are between 15 and 22 years old. The Live Like Lash award can be used towards three educational purposes:

The winners will be chosen by a committee of TLCA members with input from the family of Mr. Lacoste. The award will be announced annually at the Southern Cruiser Crawl, an annual TLCA event sponsored by CottonLand Cruisers, and to the entire TLCA club membership.

“It’s been amazing to hear the stories of the many people that Lash Lacoste touched and befriended during his lifetime,” said Heather Royston, president of TLCA. “He was a remarkable individual who will be long remembered by those lucky enough to know him personally. This scholarship will honor and perpetuate the memory of his kindness, positivity, and laughter for all of us.”

Mr. Lacoste is survived by his wife of 28 years, Amanda, and their son Jace, 25. They plan to keep Lash’s beloved 1977 FJ40 Toyota Land Cruiser in the family for many years to come.

About TLCA: Founded in California in 1976, today the Toyota Land Cruiser Association brings together Toyota 4WD owners and enthusiasts from around the world. The organization has more than 5,000 members and publishes Toyota Trails, the original, award-winning, all-Toyota 4×4 magazine available to members only. TLCA is renowned for its member 4×4 events in the world’s most interesting off-road locations as well as its support of responsible trail use and keeping trails open for everyone to enjoy.